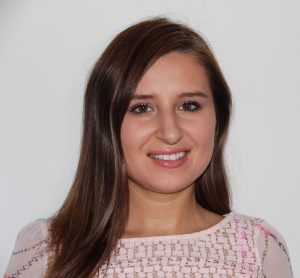 In 1992, Samra Uzunovic and her family escaped to Germany from the ethnic wars that disintegrated Yugoslavia. Later, in 2000, unable to return to their home country due to the unstable conditions, Samra and her family moved as refugees to Des Moines with very few financial resources or possessions. Samra was twelve years old and barely knew any English. She was enrolled in daylong ESL classes (and today speaks three languages, Bosnian, German and English) and later tested for the Gifted and Talented Program. Samra has always been an exceptional student; she received her Bachelor’s degree from Grandview University and recently completed her Master’s degree in Public Health at Des Moines University. While a student at DMU, Samra’s work concerned issues critical for healthy mental development.  Her focus was on rural Iowans, who are at a greater risk of mental health disorders because of a lack of services.  She developed a screening tool for providers that saves physicians significant time and improves communication with patients and families.

Samra’s dream has been to become a family physician and toward that goal she has pushed herself continuously. Samra will enter West Virginia College of Osteopathic Medicine this fall and upon graduation will return to Iowa as a family physician, providing essential services to those rural Iowans in greatest need.